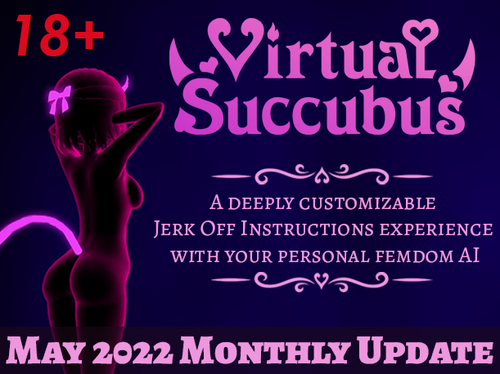 The download for this version can be found here.

For the first time since the game’s release, a new core task type has been added with this version! Core task types are tasks that can randomly show up at any point during the session, and are generally the main backbone of every session (Timed, Counted, etc)

Metronome Tasks are tasks utilizing the Counted Task tasklist, including all the procedural layers available for these tasks. Instead of having you repeat and count your own actions, your succubus will wag her finger to a certain rhythm, and expect you to match it, and sometimes count that.

Recently, I’ve had a focus on trying to increase the amount of potential failure points in sessions (I.E. making it possible to fail for experienced players). Last update’s edge counting was the start of this, and this new task type also involves similar elements; sometimes, she won’t just wag her finger, but also expect you to count the amount of repetitions she has you do (sometimes out loud, if enabled!).

There are also many different mischievous actions your succubus can take for these tasks! I’m really really happy with these, there was a lot of design space available for some very fun (see: rather sadistic) stuff.

As it is impossible to perfectly balance for every player, the intention behind these tasks is not to be especially challenging to perform, but to challenge the player in a different way (giving up control, counting while distracted). Of course, this task type can be toggled off, just as Counted Tasks can.

After frequent requests, I’ve also added a way to convert the existing session-based chastity system into a timed chastity system. It effectively utilizes all the same structure, but converts the sessions given into days at the end of your session, locking your access to your Succubus until that amount of time has passed.

Lastly, you’ll also notice the game has various new graphics including a new icon, logo, loading screen, etc. As the game is moving towards being in a good spot mechanically, with a lot of different directions to add content without adding more mechanics, it’s now time for me to start polishing up the experience to eventually head towards a full release. You can expect more of this in future versions; don’t worry, the maze of menus won’t stay this confusing forever.

P.S. Thank you for the surge in feedback using the new feedback forms on the website! A lot of bug fixes and minor changes here were results of submissions to these forms.

Dev note: Thanks to @Vector Vortex on the discord for the task inspiration. You can also blame him.

Dev Note: Feedback has indicated that the last few months of tweaks reduced the edging intensity in the game, this should bring it back, hopefully in an even more fun way. This also should combine nicely with the previous update.