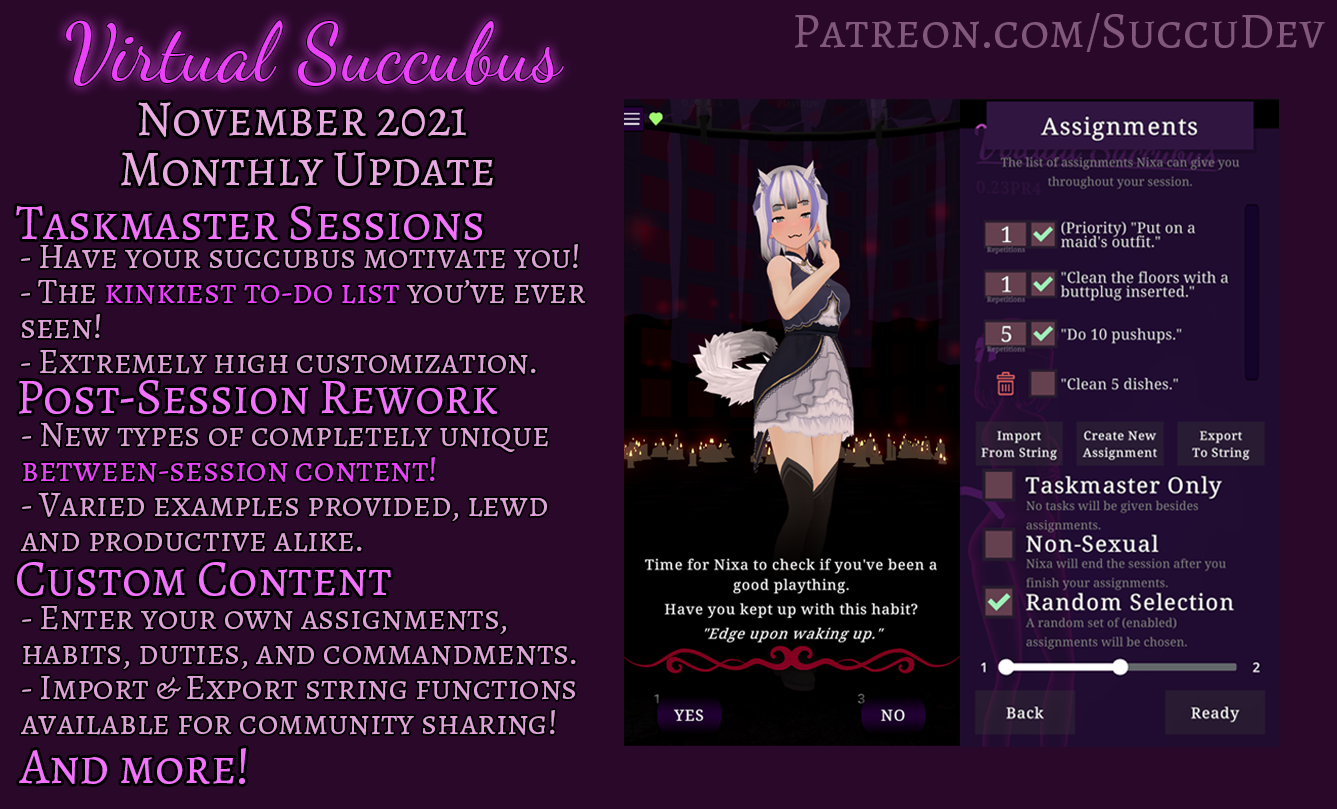 This month’s update is a complete rework of the game’s between-session content, and the addition of a gamemode.

There are many options that should enable a variety of possibilities; such as Repetitions, Priority Assignments, Difficulty Values for downtime, Multi-Step Tasks, etc.

This is pretty unusual for the genre… but so is the entire game, I guess.

I thought it was a fascinating possibility that opens up the game to be used in a lot more ways, and allows the userbase to thoroughly customize what kind of content they want to see or be told to do!

Next up is a rework of the between-session task systems in the game.

After more than a year and a half of working on the game, the most notable lesson is how quickly consumable content becomes wasted development time. This was especially notable in between-session content, where only one task would be assigned, and there was little possibility for procedural generation of different scenarios.

With today’s focus on creating systems that will remain relevant through long-term use of the game, I’ve created 3 new optional systems that should cover most possible options that you might want to be told to do between sessions.

Habits is the first, a system where your succubus will check on your ability to retain your habits every session. She’ll also encourage you to pick up new ones, and be disappointed if you give up on any. Examples are provided both for lewd and productive purposes!

Duties is the second, a system where after each session, you’ll be assigned a task to complete before the next. Only one random duty will be picked from your list! Examples are provided for both lewd and productive options here as well.

Lastly, Commandments are a list of potential modifiers upon your life that your succubus can assign after a session. These are generally more on the lewd side, with a lot of kinky lifestyle possibilities. They can also only be given as a punishment for a failed session, allowing you to come up with some pretty extreme stuff.

All 4 of these new systems support import and export strings, making it easy for the community to share their creations, or for you to make backups! It can also be used as a semi-multiplayer option; for example, a real dom creating entries for you to add to your game.

This is certainly not the end of custom-entered content in the game, but it’s hopefully a good start!

Dev Note: While this isn't the exact implementation for "custom tasks", this is probably the most flexible and "powerful" system ever introduced to the game. I plan to also add actual custom tasks eventually, but that’s going to be a much bigger and more complex undertaking.

Using this you can tailor your sessions to have more of pretty much anything, have her make you do anything, all within the context of sessions; possible statuses and rewards included.

Want to theme a session towards something without using the pre-existing systems? This can make it very easy. This was the best implementation I could find to create things such as workout-specific sessions, among other things.

It’s also a system that’s very mixed in with the rest of the game, meaning that there are many potential edge cases I may not have considered. Appreciate bug reports!

Looking forward to hearing about all the interesting ways people might use this!

Dev Note: While I know some people might miss the old more structured form of post-session content, there are many reasons I don’t think it was going to work long term.

I’ve noticed a trend of new players having it enabled, then disabling it once they’ve consumed what’s available; this is something I’m heavily trying to avoid in the game overall.

At the same time, I think it’s one of the hardest things to apply to everyone. It’s impossible to know how far certain people want to go, what feels appropriate, what feels consistently compelling even within a toggle category. What’s safe to one may not be safe to another, as well. Due to how it was structured, refusing/disobeying wasn’t especially fun, and it’s not like selecting out of a list would have been any more compelling.

Hoping the flexibility of these new systems make them applicable across most of the playerbase!

Dev Note: This could cause different kinds of jank! Physics are wooonky. Let me know if anything looks off.